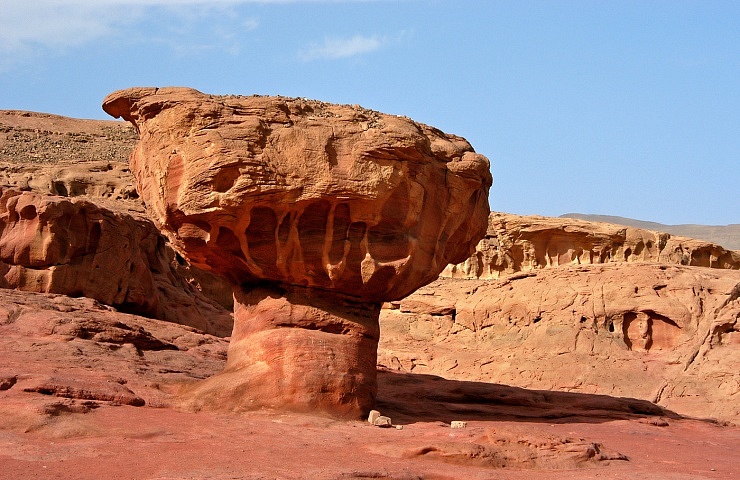 A unique Desert Gem; located in the south of Israel, a reservation known as “Park Timna”. The Park is located some 25 km north of the city of Eilat.

The uniqueness of the park lies in its combination of ancient Biblical history,

Archaeological findings and breathtaking landscape. It tells the stories of King Solomon’s’ Pillars, of the Egyptian Goddess Hth’or, of the first known Copper-Mine and more.

The Park spreads over an area of some 60 square meters and is surrounded by a horse-shoe shape of steep cliffs.

At the center of the reservation lies “Mount Timna”; of 453 meters high. The valley is a Geological area which combines rocks as well as soil -containing minerals such as copper, iron, magnesium and others.

The Park consists of the first place in the world, known to be a Copper Mine. As such, the Park offers its visitors thousands of copper mining shafts, as well as remains of smelting furnaces, dated back to the ancient Egyptian empire.

The Timna reservation remains a living proof of the development of mining and its production.

When guided though the Park, you could get excited about Copper-stories of the Goddess and God Ramses Hth’or, in combination with various other fascinating historical myths of the remains of Egyptian mythology. To illustrate the

experience, you can watch a performance of how time has evolved in the mines’ Copper production process, from ancient Egypt to present days.

Fascinating findings can also be seen at various spots in the Park, as at Hth’or’s temple (the Egyptian Goddess)- located near the magnificent pillars of King Solomon, or the fungus, and of course the impressive arches’ site -where

ancient rock-art painting of hunting ostriches and gazelles, chariots drawn by oxen, can be spotted clearly.

Visitors are offered various activities like boat-paddling at the lake, filling bottles with colored sand, minting coins of “King Solomon” and a variety of other activities for adults and children.

Since the Park is located in the Desert; it is very warm during July-September, at daytime and cold at night.