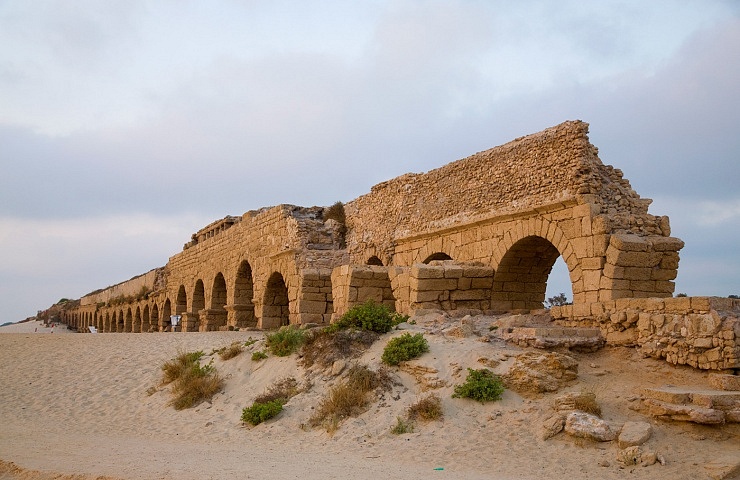 During the roman reign of Palestine, between 63 BCE until 324 AD, there had been a variety of constructions that had been carried out throughout the land.

One of the most outstanding ones is the water supply system – the Roman Aqueduct.

It had consisted of several independent yet interconnected sets of Aqueducts, starting at the north (near Nahariya) and crossing over the land deep south.

A sophisticated set of Aqueducts had surrounded the city of Jerusalem, being the capitol of the land; a place at which most citizens had lived, during this time period.

Most Aqueducts are monumental and architectural wise – amazing. Some of them are of a large capacity, i.e. over a quarter of a million Cubic meters of water.

Along the path, the Romans had made use of exiting natural pools or had carved relevant others.

One of the most famous Aqueducts is the Caesarea’s ancient aqueduct.

BTW, the Aqueduct (Arches) Beach, in Caesarea, is one of Israel’s most picturesque beaches, is set in the scene of the aqueduct’s ruins that had been built by famous King Herod, as local ruler in the name of the Roman Empire’s mandate.

The Aqueduct was expanded 300 years later, in order to enable running water to Caesarea from a spring at the slopes of Mount Carmel (near the harbor city of Haifa).