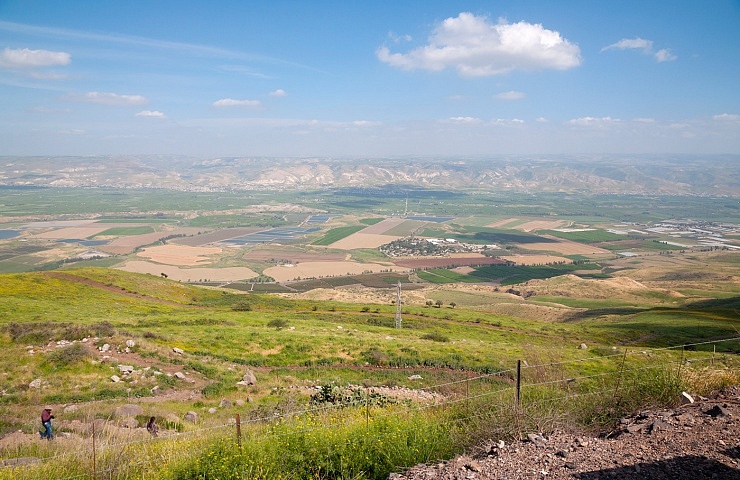 The valley lies within the Syrian-African rift, stretching along the dead-sea from southern Turkey towards the Red Sea.

The Jordan Valley had already been cited in the Bible, as of earliest days of the Israelite, when they had crossed the river Jordan into the land of C’anaan.

The Book of Joshua describes how the Israelite arrived at Gilgal, after having crossed the River.
Archaeological findings have been found during recent years; dating back to early civilization as of 12th to 13th centuries B.C.E. (!).

A tour of the valley combines Archaeological findings, scenery and mainly people: Jews and Arabs living one aside each other, in peace.

Interesting sites to visit in the Valley are:

• The wall of Stalactites, rising on a curve of the high-commute road leading to Ma’ale Efraim;
• The Pa’Zael fountain reservation;
• A Packing House of Peppers, in Kibbutz Na’aran;
• The Palms/Dates’ plantation- dates are the major produce of the valley, being shipped overseas to a variety of countries;
• The abandoned Military post overlooking the “ZOR” valley and the river Jordan;
• The Malha-valley (“Wadi” in Arabic) swamp… yes, a real small swamp…;
• The dipping experience/ Immersion in “Kasser-El-Yahud”
• The “Uja” area, including the lone-range farm, the fountain, as well as the greatest coffee at     Tyassir’s;
• The Spices’ farm in Na’aama settlement;
• The Monastery at DIR-HAJLA;
• The old Willow house;
• The “Ha’bikaa Monument;
• The fort and Lookout- point at Sartaba “Alexandrion”, former fort that had constructed by the Hashmoneans on a mountain near the Jordan Valley. It was probably named after Hashmonean king- Alexander Jannay.
• The Adam bridge;
• The ecological village of Rotem;
• The “EL-Malia’ch” Hamam;
• The “Um-Zuka” reservation;

Agricultural settlements are spread all over the valley; their main crops are fruits, dates & figs, grapes, spices and fish.

Aside the Arab population in the valley, a number of some 4,000 Jewish families resides in it, too.

An interesting number is the 18,000 acres of Palm trees in the Jordan valley! Directions:
There are two major ways to reach the area; one form Jerusalem on its main route of the valley, route number 90 (“The Ha’bikaa road”)

Or-
Via road number 5 leading from Herzliya towards the valley. Road no 5 is also called “Hotze-Shomron”.

A security note: even though daily life of Jews and Arabs in the valley is a peaceful one, there are some terrorist-opponents who may be acting as security risks while on the road. It is advised to consult before driving to the valley. A tour-guide would be a wise recommendation when traveling to the area.