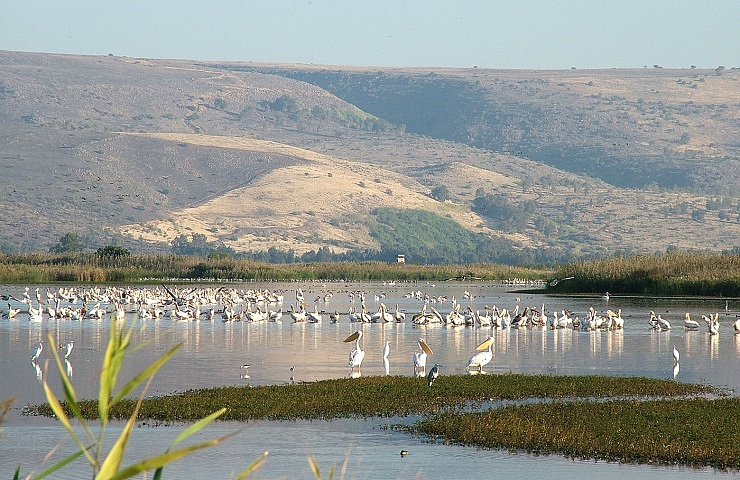 The Hula Valley is a unique region in northern Israel.

It is a major stopover for migrating birds – throughout the Syrian-African Rift stretching in between Europe, Africa and the near east.

Originally, the Hula had been a swamp. It had caused much illness to its inhabitants and had brought along many deaths. Years ago, in 1951, it had been decided to drain it but later, Agricultural scientist grasped that drainage had only caused more damage so a new project – a unique Israeli natural preservation project had gone underway in order to re-flood it and to create a wonderful valley, abundant with water.

This decision, taken in 1964, had created a blissful habitat for a variety of poultry and other kinds of animals.

The tour at the Hula is suitable to the entire family and is an easy walk. The path winds comfortably along some water canals, enabling several lookouts to the reservations’ wildlife -in all its glory: in the water there are a variety of swamp-plants and fish.

Other animals such as pelicans, cormorants and gulls, ducks, coots, and herons are often seen roaming around.

We recommend ending the tour by visiting the new Visitors’-Center in order to hear the explanations about the site, also enjoying an audio-visual show that enables, via multimedia technology, to feel the sights-and-sounds of the natural reserve.
The Hula small-lake (“Agamon”)
Leaving the reserve, a natural path will be to proceed to the Agmon, the smaller lake that serves as a base-station for rare birds that are migrating form African or European countries via the Syrian-African Rift.

There are some 200 species of birds that stay for some time at this base and then continue their tour. This is a major site for bird-watching!

There are a varity of attarctions at the site, for children and families; bike ridies, carts, day or night tours and more.

* Photos in this post were taken by Gil Levene Feinberg