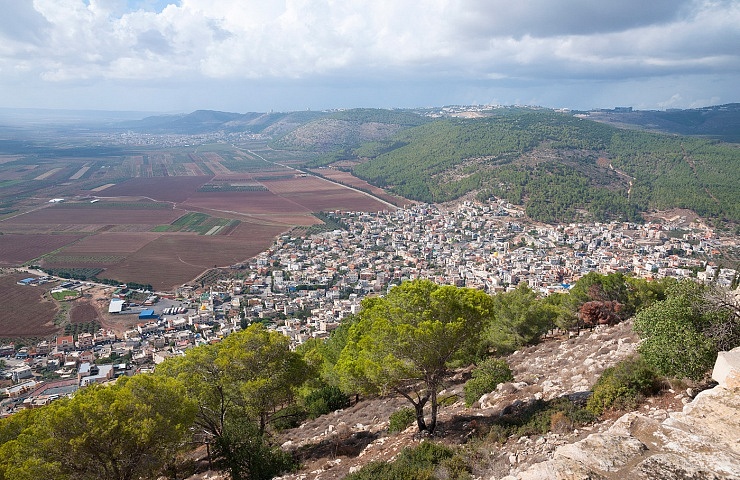 Mount Tabor is a high mountain; well known throughout its history, located in the south of Nazareth.

The mountain is part of the scenery of the Jezreel Valley, in the north of Israel and it one of the highest mountains in the Lower Galilee.
The summit’s height reaches 562 meters above sea-level and rises to a height of 400 meters above the surrounding. The summit is noticeable from even remote locations throughout the Galilee and even from the Golan-heights.
Mount Tabor has a long standing history as well as tradition, to Jewish, Christian and Muslim believers.
According to Jewish tradition, Mount Tabor is one of the mountains on which the “Torah” (the Holy Bible) had been handed over to the Jewish people.
According to Christian tradition, the mountain is the site where the Transfiguration had occurred.According to Christian tradition, Jesus climbed with several of his students on top of a high mountain, and there spoke with Moses and

Elijah who informed him of his impending death. Nowadays, two Christian Churches are situated at the mountains” summit.

Between the years 1919 -1924 a Catholic Church called “The Church of the Transfiguration” had been built on the mountain top.
The architect’s name, who designed the Church, as well as other Churches throughout Israel, was Antonio Barluzzi.
This Church had been built on the remains of a 6th century Byzantine Church and also on the remains of a Crusader, later, Church from the 12th century.
The Church belongs to the Franciscan order, and monks live nowadays in the Monastery next to the Church, that had been built in 1873.
Next to the Catholic Church, a more modest Orthodox Church had been built by the Romanian community funds. The Church is dedicated to Elijah and it was the first religious structure built by the Romanian Christians in the Holy Land; in 1862.
Mount Tabor had turned into the focus of pilgrimage from the 4th century onwards.
Mount Tabor on the Muslim tradition is a sacred place, also named “Jabel-A-Tor”.
Three major villages have been built at the sloapes of the monuntain Shibli, Umm al-Ghanam and Daburiyya.