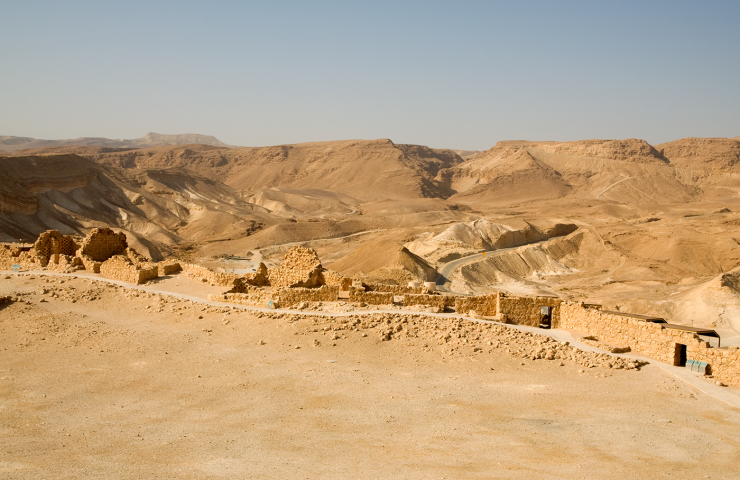 Masada (539 B.C -70 A.D) is an ancient fortress, built by King Herod, based on a high plateau in the desert, overlooking the Dead Sea. Masada was declared a UNESCO World Heritage Site in 2001.

King Herod was known as the builder of Masada. The plateau’s natural defensive features (vertical cliffs of some 400 meters above the Dead Sea) were strengthened by the King into a 400×600 meter plateau.

King Herod had built several buildings upon this plateau; large and small palaces, a bathhouse, storerooms for food and drink and many other amenities.

Masada’s northern palace is the most impressive structure, constructed against the northern cliff-face as if hanging over the abyss. A staircase led to the middle level – a large, round hall surrounded by a colonnade that extended almost to the cliff-edge. On the lowest terrace was another large hall adorned with spectacular wall paintings, in which a private bathhouse for the palace’s residents was found.

During the time of the great Jewish revolt against the king and the Roman Empire, a small amount of Jews (967 men, women and children) took command of the fortress and had established base up at the palaces of the fortress. The rebels have turned a building near the northern wall, which in Herod’s day had been a stable, into a synagogue. This is considered as one of the earliest synagogues in the world, as the Holy Temple had still been standing in Jerusalem.

The siege ended (70 A.D.), when it was obvious to the small group of rebels that they will not be able to survive the fight and it had been decided to kill themselves so as not be taken hostages (or slaves) by the Romans. A handful of survivors survived the communal homicide to tell their heroic story.
Masada has turned into a Myth in the Jewish and Israeli heritage, symbolizing the evolving identity of many of the Israeli generations, portraying honor, bravery, a national identity, the constant fight against submission and the spirit of “fighting till the end” for Jewish (as well as Israeli ) independence. The Masada Myth, a pillar of a proud and brave nation, has influenced youngsters and adults, in both Israel as around the world. Masada is a synonym, today, of total and unselfish bravery.
What should I know about the Site?

While most tourists choose to take the elevator up to the top of Masada, there are others who choose to hike to the top, via the snake path.

The snake path (named for its geographical snake-like route) takes about 45 minutes to an hour to get to the top and less time going down. While it may not be as fast as taking the elevator up, the snake path is a wonderful way to appreciate the scenery and the magnificence of Masada. The hike up is easy to navigate and there are plenty of places to sit down for a rest and take in the panoramic views.
Once on top of the fortress, it would take a few hours to explore the various archaeological findings, as some o the findings have been preserved in a very good manner.

A museum has recently been built on Masada, a “must” to all visitors.

Also, one of the beauties of visiting Masada is climbing up the fortress in the early hours of the morning, so as to reach the top at dawn, to enjoy the beauty of the site as well as the beauty of creation.
How to reach Masada?

The top of the plateau can be reached by an elevator /cable-car from the Dead Sea side (via route number 90), or by two other trails:

1. The ramp trail – a steep but relatively short trail ascending from the western parking lot (access from the city of “Arad”). Climbing this path takes some 20 minutes. This trail had been formerly created by Byzantine monks.

2. The Snake Path ¬ a longer trail, ascending from the eastern parking lot of Masada. It takes about 45 minutes to an hour to climb it

-The snake path: opens about one hour before sunrise, and will be closed in extreme weather.

-The sound and light show: a thrilling sound and light show on the western side of the mountain (reachable via the city of Arad), tells the story of the rebels’ last days at Masada. It takes place from March to October every Tuesday and Thursday. Individuals may attend the show without reservations; groups of more than 30 participants must reserve seats ahead of time.

***The show is simultaneously translated into English, Russian, French, Spanish and German through ear-phones rented at the site.

– An audio-guide at Masada is available for use. The audio-guide allows the visitor to select information to listen to (including bygone gossip and politics from 2,000 years ago…) according to your interests and your own pace.

-A special headset with a T-link hook-up is available for the hearing-impaired by the park staff.

NewerThe Jewish Mezuzah
OlderLa Traviata – at the slopes of Masada