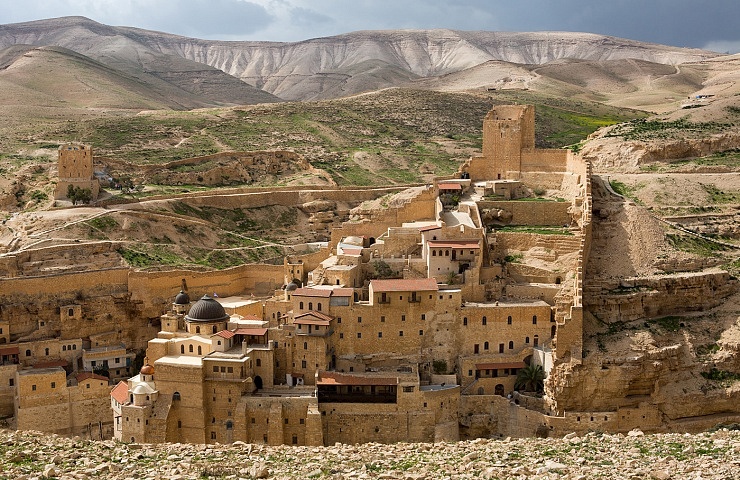 Mar-Saba Monastery is a Greek-Orthodox Monastery, built on a cliff just outside of the Kidron Valley, near Jerusalem– in the northern part of the Judean Desert, also not far from Beit Lehem.

Some call it: “Heaven on Earth, in the middle of nowhere”.

The Monastery is named after its founder, Monk Sabas. The Monastery has been active for the past 1,500 years, having been established in the 5th century AD.

Monk Sabas, had dedicated his life’s work (for nearly fifty years) to establish Missions and Monasteries in the Holy Land (Israel), and has been commemorated as the most important figure among the monks of the desert, during the Byzantine period.

Mar-Saba is one of the oldest and most important Monastery in Israel.

It is geographically isolated, and as such served best as a Museum of ancient artifacts, that had been collected by Monks for centuries: art objects, rare manuscripts and old writings.

The manuscripts of the Monastery’s library are all rare copies of the Old Testament (the Hebrew Bible); of the New Testament, of bond-messengers from the 7th,  9th and 12th centuries as well as some of Homer’s Iliad writings.

During the 70th, most of the artifacts had been transferred to the library of the Greek- Orthodox Patriarchate in Jerusalem.

One of the Monastery’s strictest laws, similar to other monasteries of that period, is the prohibition of women’s entry. It is told that even St. Sabas’ mother could not have entered to visit him.

This prohibition has existed since the founding of the Monastery and is valid even today.

Women are only allowed into to the Monastery’s tower, where they could watch the inside of the building.

The best time to visit is between November and May. June, July, August and September are far too hot and should thus be avoided.

On Fridays the Monastery is closed; other days: open between 08:00 am to sundown.

In the vicinity of this site you may also want to visit Jerusalem; Beth-Lehem; the Dead Sea ….