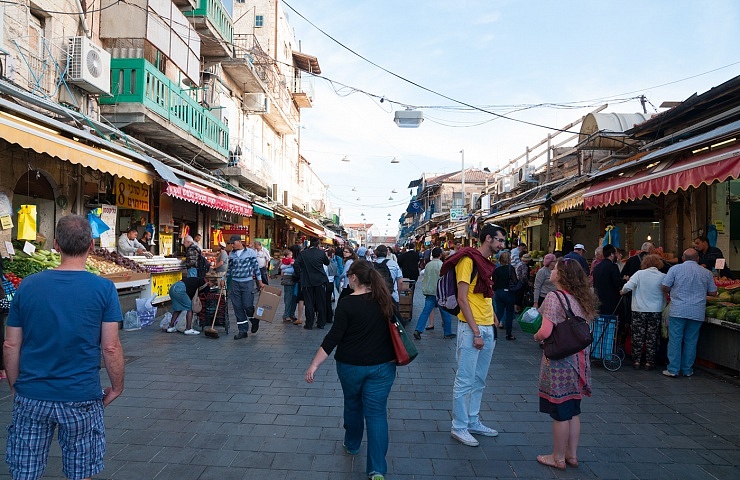 One of Jerusalem’s unique attractions, aside its age-old ruins and monuments, is the marvelous marketplace called: “Machne-Yehuda”, or as referred to by Jerusalem inhabitants as simply the “SHUK”.

The marketplace is situated in the heart of Jerusalem, in between Agripas and Jaffa streets, in the Machne-Yehuda neighborhood.

The market offers a variety of fresh and qualitative food and beverages such as meat, fish, fruit, vegetables, eggs, baked -goods, wines, Oil and a numerous variety of sweets. It also offers clothing, art, flowers and other accessories.

The market dates back to the period of the Ottoman reign over Jerusalem.

It had initially started at the end of the 19th century, as local peasants had brought their produce to sell in the heart of the city and had slowly expanded when the grounds were turned into an organized market by authorities.

A significant difference in the external appearance of the market had taken place during the British Mandate period, as it had been further developed.

Over the years the market has grown and expanded, turning into as extremely successful place, while keeping its authenticity and masterfully managing to combine old and new.

You are welcome to join one of the market tours; a great way to meet, feel and taste its flavors and scents; getting an inside glimpse at the front as well as back stage of this colorful and enchanting place.

The market is probably the most breathtaking market in all of Israel, a venue you wouldn’t want to miss out; adding its unique and bubbly atmosphere to your Jerusalem experience.

You are welcoem to view our video of the marketpace, as well as viisit our You-Tube channel.http://www.youtube.com/watch?v=DH-19C3b9sA