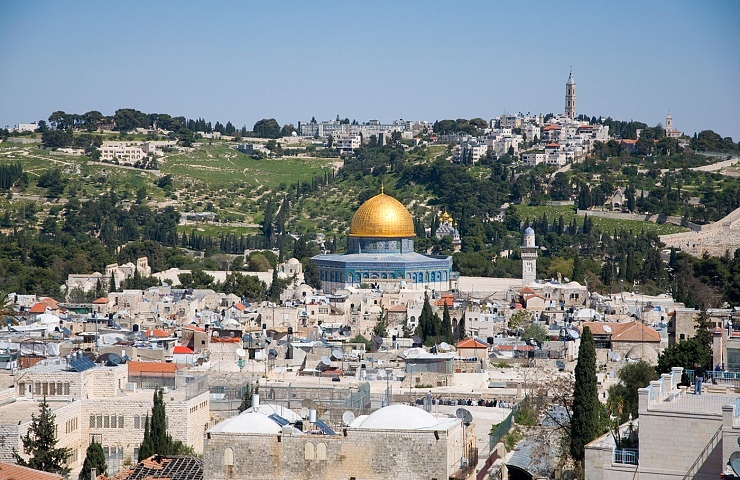 Jerusalem, in Hebrew: “Yerushaláyim;” is the capital of the state of Israel and the largest city in the country.

Jerusalem is a holy city to the three major religions— Judaism, Christianity and Islam. The city is located in the Judean Mountains near the Dead Sea.

In Judaism, Jerusalem is considered as holy based on the Biblical Old Testament, according to which King David, of Israel, had established the city as the capital of the Israelite tribes, around 1,000 BCE.

Christianity considers Jerusalem as holy, as of the days of Jesus’ crucifixion, in the year 33 CE.

Jerusalem is the 3rd holiest city in Islam and a focal point for Muslim prayer. Based on Islamic tradition, Muhammad made his night journey from there.

During the city’s long history, it has been destroyed, attacked, captured, set on fire, looted and besieged many times.  The old city has survived it all.

The oldest part of the city (believed to have been settled as of 1,000 BCE and even before) makes Jerusalem one of the oldest cities in the world.

The area of the walled Old City was nominated as a World Heritage site.

The Old City had been divided, some 150 years ago, into four quarters, called: Armenian, Christian, Jewish and Muslim Quarters.

You are welcome to explore the various parts and sights of Jerusalem, which we have gathered below, as tips for a successful tour:

Aside the world famous sights, that are certainly not to be missed, there are several other “Gems” that we would like to shed light onto:

In the vicinity of this site you may also want to visit Beth-Lehem or the Monsatery of Mar-Saba..