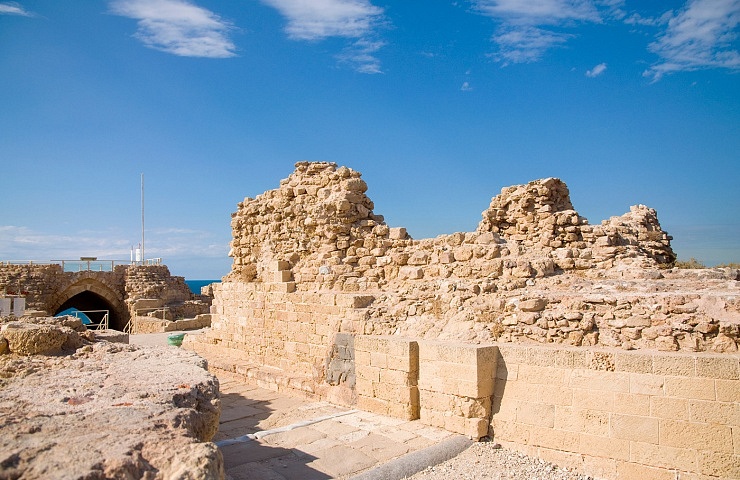 Apollonia – at Arsuf, is an ancient city whose ruins are located today near the city of Herzliya, at a location called “Arsuf” – on coast of the Mediterranean Sea.

The place had been designated as an official National Park.
Arsuf was established in the Persian period (between 6th to 4th centuries, BC) by the Phoenicians, and was named in honor of Morris.
The place had been managed by the Persian government.
One of the main products of the region was the purple color and they had traded with the Aegean region as well as with Greece.
In year 640 the city had been conquered by the Muslims. They city was then fortified and surrounded by a wall – following repeated attacks by the Byzantine fleets from the sea.
Alas, the city’s area had been narrowed down, as well as the size of its port. However, during this period the pottery industry had flourished.
In -1101 Arsuf was captured by the Crusaders;
From 1207 onwards, Arsuf changed hands by far too many Crusade “owners”…..
John of Ibelin, Lord of Beirut (1177—1236) became Lord of Arsuf in 1207. His son John of Arsuf (c.1211—1258) had inherited the title and then it had been passed on to John’s eldest son -Balian of Arsuf (1239—1277).
The later had built new walls, a large fortress and the new harbor.
From 1261, the city had been ruled by the “Knights Hospitallers”.
In 1265 Sultan Baybars, ruler of the Mamluks, captured Arsuf, after 40 days of siege.
The Mamluks razed the city’s walls and its fortress- to bare foundations, and the city had remained empty ever since.
The Israeli archeologist, Shmaryahu, had uncovered in 1962, hundreds of burial caves, believed to be used by the inhabitants of ancient Apollonia.
Further archaeological excavations had been carried out throughout the seventies and the nineties and in some other parts- it is still underway, these days. These excavations have revealed many parts of the ancient city.
Apollonia had been declared a National Park and the Israel-Trail passes through its gates.
The park has been enjoying a variety of visitors in recent years; by trained hikers as well as families. Tours in the park may take up to an hour, each.