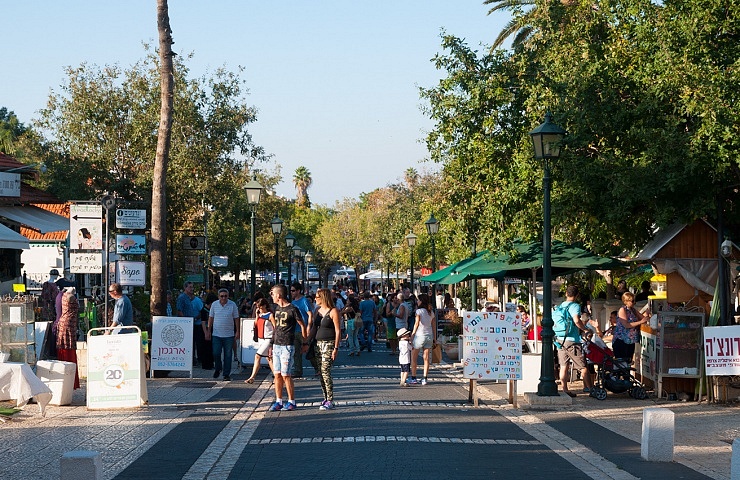 Zikhron-Ya’akov means “the memory of Jacob”; an Israeli city located some 35 Kilometers south of Haifa, at the slopes of the Carmel mountain.

The city is facing the Mediterranean Sea.

It was founded in 1882 by Baron Edmond James de-Rothschild and named in honor of his father.

The city is one of the first Jewish settlements in the country; having been established by Romanian pioneers (Halutzim) members of the Hovevei Zion movement.

One of the most famous families of Zikhron Yaakov’s history is the Aaronsohn family.

Two of its members: Aaron and Sarah were the founders and activists of the underground “NILI” movement, spying for the English against the Turkish regime, in Palestine, during the time of First World War.

In the Southern entrance of Zikhron, the founders’ monument is located, in what once used to be the ancient center of the colony.

This structure is in the form of a rolled parchment. Outside the ceramic wall, engraved with the names of the families of the founders of the colony. Inside the building one can find photographs- commemorating the first colony’s early

Zikhron’s main street is called “The founders Street”-HAMEYASDIM street- part of that street was preserved and refurbished and known as the “Wine Route Street”, a lovely gem that attracts hikers and many other visitors.

Located on the side of the street is Aaron Aharonsohn’s house; a house that had been turned into a museum, as well as some other local historical houses that tell the story of the place.

Baron Edmond James de-Rothschild’s major assistance to the new settlers lay in establishing vineyards, one of the founding cornerstones of growth of the settlement. Until today, Zikhron-Yaakov is blessed with the largest and finest of

vineyards of the country.

Some sites of importance are:

Over the weekend, the city is swamped with visitors, who come to walk along the main street, sit for a coffee or lunch at one of the coffee shops or restaurants, roam the galleries and taste history in the very pavements and walls of the
city.