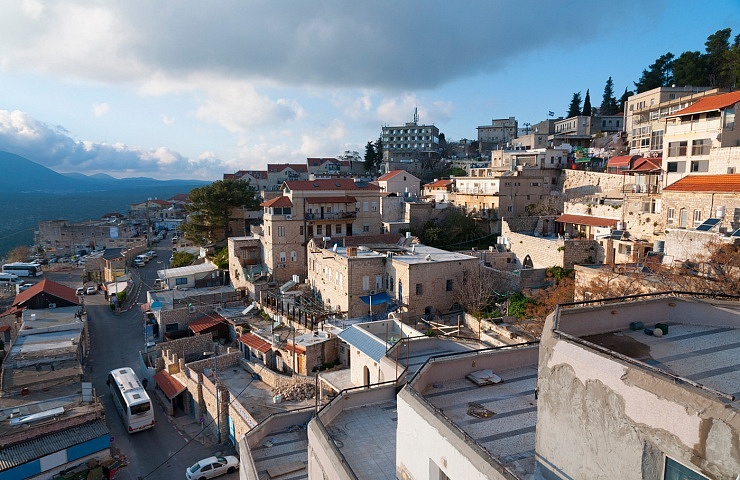 There are many indications that Jewish life in Safed dates back several thousand years, but the city draws its fame from the development that it experienced in the 1600s. Following the Spanish Expulsion many of the great Kabbalistic

rabbis of the era settled in Safed to live, learn and teach Kabbalah.  The city became known as the “City of Kabbalah” and was recognized as one of Judaism’s Four Holy Cities.

Visitors can spend a few hours or a few days in Safed and always find plenty to do. There are a wide range of religious, cultural and historical sites in the Old Jewish Quarter which is located next to a thriving Artist Colony where artists

from all over the world come to work and exhibit.

Safed, a quaint mountainside town, nestled amongst the hills of the Galilee, was recently named as one of CNN’s “Ten Most Beautiful Cities in the World.”

Shabbat in Safed
There’s no religious coercion in Safed but the atmosphere of the city has created a Shabbat-ambiance in which few people drive or perform any of the traditionally-prohibited tasks that are de regular in other Israeli towns. Visitors can find

at least four different catering spots in the city that are open on Friday mornings for take-out food and by 2:00p.m. the city shuts down as shopkeepers and others go home to prepare for the Sabbath.

There are dozens of synagogues that open their doors to residents and visitors for Shabbat prayers. In addition to the historical Ari Sepharadi, Ari Ashkanazi, Abuhav, Alsheich, Yossi Banai and Yosef Caro synagogues there are

synagogue that follow specific Jewish traditions. Visitors can attend ethnic synagogues such as Yemenite, Moroccan, Tunisian, Hungarian, and Romanian synagogues as well as synagogues affiliated with the Breslov, Chabad, Sanz,

Stolin-Karlin and Kosov Hassidim.  In addition there are two synagogues which adhere to the Shlomo Carlebach style of prayer, Beirav and the House of Love and prayer, where congregants sing and dance through the prayers. The

Regardless of a traveler’s level of observance, he will be able to enjoy a restful Shabbat in Safed, though food arrangements must be made in advance because all of the eateries and shops are closed until Saturday night.

Art in Safed
The Artist Quarter of Safed was established in the early ’50s when Israel’s premier artists opened summer galleries along the cobbled streets of the area which came to be known as the Artist Colony. Most of the great artists of that era,

including Moshe Castel, Aryeh Merzer, Yossi Levanon, Tziona Tager and Yehuda Amitai lived and worked in Safed. Following the passing of these artists the Colony experienced several years of inactivity but today new artists and

galleries have opened throughout the city and provide new opportunities for tourists to view Judaica and other types of art. Some of the noted galleries include the Mikedem gallery of sculpture, Robert Rosenberg’s gallery of his own paintings and a group of Kabbalistic artists who combine their studies of Jewish mysticism with their art.

Activities in Safed
Visitors to Safed can spend an hour or two and stroll the lanes of the city, or can stay for a day, two days or more for an in-depth visit. There are plenty of activities available to engage visitors of any age.

For families the Otzar HaStam Center offers an interactive exploration into the ancient tradition of Jewish scribes who create parchments for Torah scrolls, tefillin and mezuzzot according to exacting laws. The center presents an audio-

visual presentation of the craft and then allows visitors to create their own parchment using a quill and parchment paper.

Young children may enjoy the petting zoo which is located near the Rimonim Hotel. The zoo also offers jumping toys and a small park along with the animal exhibits and a small handling area.

The International Center for Tzfat Kabbalah is open daily with a 15-minute movie that gives an overview of Kabbalah, its meaning and its connection to Safed.