Safed- a center of “Kabbalah” 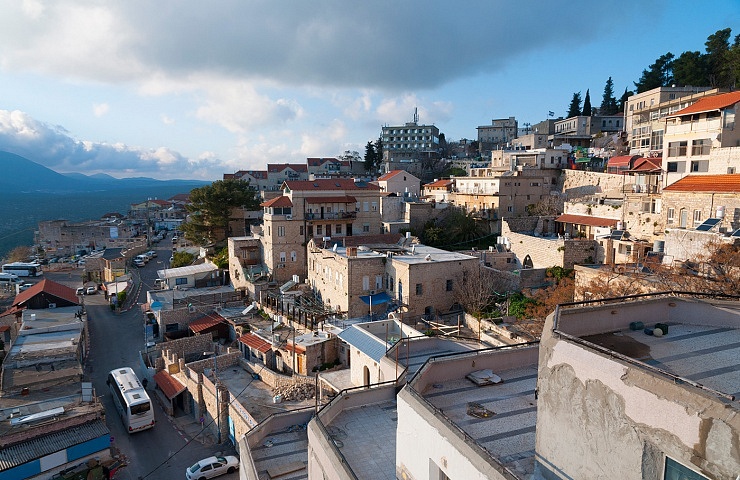 The city is located at the altitude of 2,790 feet (850 meters) and is most probably Israel’s highest town as well as its coldest one. In Hebrew, the name is pronounced as “Zefat”. Safed is located at the northern part of the Galilee, north of the Sea of Galilee.

The ancient city dates its importance, of being a Jewish religious center, back to the late 15th and early 16th centuries. Interestingly, the city has not yet evolved in the days of the Bible; hence it is not mentioned there at all.

Safed had met with many conquerors; starting with the Roman times, shifting to the Crusaders and later, passing through the Muslim conquest. He Ottoman Empire was the last to gain hold of the city before the British took over the mandate to rule Israel.

Jews started immigrating to Safed, in large numbers, after having been expelled from Spain in 1492 (and while Columbus was sailing the oceans….). ).

The city’s uniqueness has always been its association with Jewish mysticism, the “kabbalah”. Major Rabbis have lived in the city, taught, wrote books and guided the Jewish people that had lived outside of Safed.

The holy book of the “kabbalah”, called “The Zohar”, had been written by the second-century Talmud Rabbi Shimon Bar-Yochai, who believed that each and every word in the holy Bible had a higher meaning. The author of the main part of

The city had also attracted various other Jewish scholars and spiritualists, including Joseph Caro, the author of the “Shulchan Aruch” famous book, Rabbi Moshe Cordovero and others.

The Jewish community that had managed to thrive in Safed, for more than 400 years, had encountered rough times; hunger, cold, cruel rulers, a devastating earthquake, and eventually the fight for independence. In spite of all of the

above, the small community showed great valor in their persistency in preserving the city and its holiness.

The 1929 Arab riots had caused a gradual decline of Jewish population that resulted in the Arab community becoming the majority of the city. When the British withdrew from their Mandate of Palestine in 1948 and handed the Citadel over to the Arabs, the remaining Jewish residents, backed by reinforcements from the “Haganah” movement (later to turn into the IDF), held off the Arab forces and kept the city a part of the new state of Israel.

The city houses several unique and ancient synagogues. In past years the synagogues had been used as the center of daily life as well as spiritual exploration. Hence, the large number of synagogues spread throughout the town.

Sites of value to visit:

The synagogue is one of the most important and highly visited Ashkenazi synagogues in Safed. This is the perfect setting to learn about the Ha’Ari and his contribution to the “Kabbalah”. Another relevant story is the story of the brave

survival during the War of Independence.

The synagogue is the place where one can learn about the famous “Shulhan Aruch” book (The ‘Set Table’), which dates back to the middle Ages and is still referred to as the primary source for understanding Jewish religious laws, in their

The Bana’a Synagogue is the oldest synagogue in Safed and was first constructed in the 15th century.

This synagogue has managed to remain untouched, as of the date of its construction, during the 16th century, and in a miraculous way has survived- intact- throughout all of Safed’s earthquakes.

A walking tour in the Jewish quarter is highly recommended; to feel, see and mainly Inhale the ancient style and code, as it had been preserved for centuries, up until these very days.

The Artist’s quarter in the cobblestone neighborhood of the Jewish quarter is a fascinating stroll; between beautiful galleries of photography, painting, sculpture, ceramics, jewelry design and Judaica, of course.

The Beit-Hameiri museum is a historical museum that documents Jewish life in Safed from the past two hundred years. Each floor of the museum represents a different activity in the life of the local Jewish community; that have been

recreated to allow visitors an authentic glimpse into the past. The museum is located amongst archeological ruins that could also be viewed from within the museum.

Another pilgrimage site, just outside Safed is the village and Mountain of Miron.

A synagogue dating back 1,700 years was found here. According to tradition, Rabbi Shimon Bar-Yochai hid in a cave in the nearby town of Peki’in and wrote the book of the “Zohar”. Today, Peki’in is almost entirely populated by Druze.

On Lag Ba’Omer, (a Jewish Holiday of lighting bonfires), thousands of Israelis hike up Mt. Miron (at the altitude of 4,000 ft.) to pray at the tombs of Rabbi Bar-Yochai and his son Eleazer. People come to honor the Rabbi, who is believed to have died on this date.

-It is cold and rainy in Safed during winter. Warm cloths are highly recommended.

-Since many of the sites are religious ones, it is recommended to wear modest outfits.

-It is advised to park the car at one of the many parking lots and walk on foot while touring the Jewish and Artists” quarters.

-Touring the city may take up to 4 hours.

-Drive north on route number 90. After the Sea of Galilee continue as per “Safed” signs and turn left at the Rosh-Pina/Safed  junction.

In the vicinity of this site you may also want to visit Rosh-Pinna; the Golan Heights or Mount Hermon...