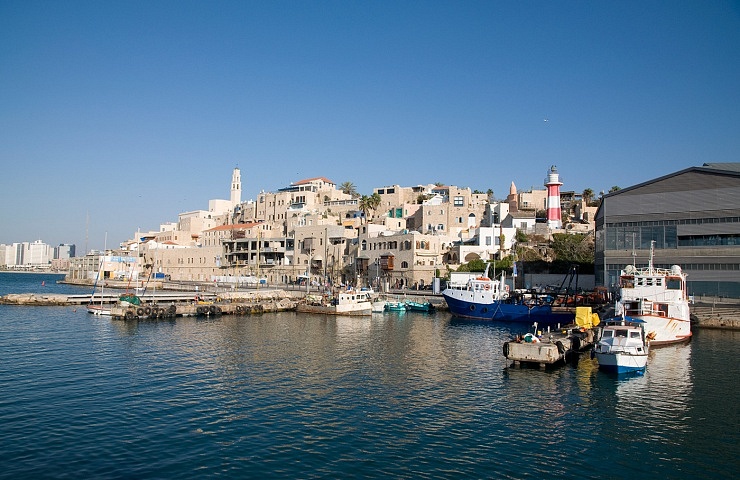 The Tel – (a historical mound) of ancient Jaffa is visible from the entire sea-front of Tel Aviv, into which Jaffa was incorporated 60 years ago. Dating back over 4000 years, Jaffa was the main port serving Jerusalem from the days of Kings

David and Solomon, until the end of the Ottoman era in 1917. Open-to-view excavations show a 3,300 year old gate & palace and a Maccabean fortress.

Modern attractions – A thriving centre of galleries, restaurants and quiet coffee shops set in mediaeval alleyways named for the signs of the Zodiac, Jaffa has unique centres of arts and crafts work, from Yemenite silversmiths to Frank

pinnacle of the hill features the Statue of Faith and a viewpoint overlooking all of Tel Aviv. Another alley will bring you to Ran Morin’s living sculpture of the last (suspended Jaffa Orange Tree).

Pharaoh Ramses II to Napoleon Bonaparte, with many interesting Ottoman Governors in between, for the 400 years preceding General Allenby’s WW1 conquest, who designed and shaped Jaffa’s landscape and architecture visible today.

Most notable was ‘Abu Nabut’ who built Jaffa’s main Mosque, now-restored. A visit to the underground visitors centre in Kedumin Square reveals excavations from the Herodian-Roman Era, with a short movie and a scene from the city’s fall to the Roman Armies in the “Great Jewish Revolt” of 66-73 CE (AD).

Legend of Andromeda – A walk to the south from any part of Tel Aviv’s pleasant, paved, modern promenade will bring you to ancient Jaffa. You’ll see the rock of Andromeda in the natural bay, part of a prehistoric reef, but linked with a legend in Greek Mythology involving the quests of Zeus’s half-human son Perseus to achieve immortality; the daughters and wrath of the sea-god Neptune, the Medusa’s head, Atlas and much more…

The Wishing bridge – a popular site for wedding photos with brides and grooms of different Faiths, the legend is that if you stand by the plaque of your individual Zodiac sign, look at Andromeda’s rock and make a wish, it is sure to come true, just as Perseus’rescue answered the wish of Cassiopea, mother of the doomed and beautiful princess of Jaffa.

Acts of the Apostles – The red-stucco church of St. (Simon) Peter dominates the headland of Jaffa. It is named after the Prince of Apostles, who was summoned by a messenger, set off North from this place for Caesarea, in order to convert the first Gentile into the new Faith.

Another Jaffa site mentioned in Acts is the House of Simon the Tanner, where Simon-Peter has his strange vision of the cloth and unclean animals and believed to be where he raises Tabitha from the dead.

French Cannon and Bedouin Walls – In February 1799, seven years after the French Revolution, a Corsican General in the French Expeditionary Force, having conquered Egypt from the Turks and armed not only with cannon, but with a party of hundreds of scientists, cartographers and explorers, arrived and laid siege to Jaffa. The walls they faced here, as well as those in Akko, had been built 120 years earlier by a Bedouin ruler and tax-collector for the Ottomans who’d encouraged Jewish resettlement in Galilee. For Napoleon Bonaparte, the campaign ended in disaster, his plague-ridden army having massacred the defendants of Jaffa, later left in retreat to Egypt having failed to conquer Akko.

None of this stopped him being declared Emperor in Paris- just a few months later.