The Magic of Nazareth

Christianity, Islam, Northern Israel, The Bible and places in Israel, Tips of the Top in Israel  /  March 28, 2013  /  By Aaron Fin
Home / Religion / Christianity 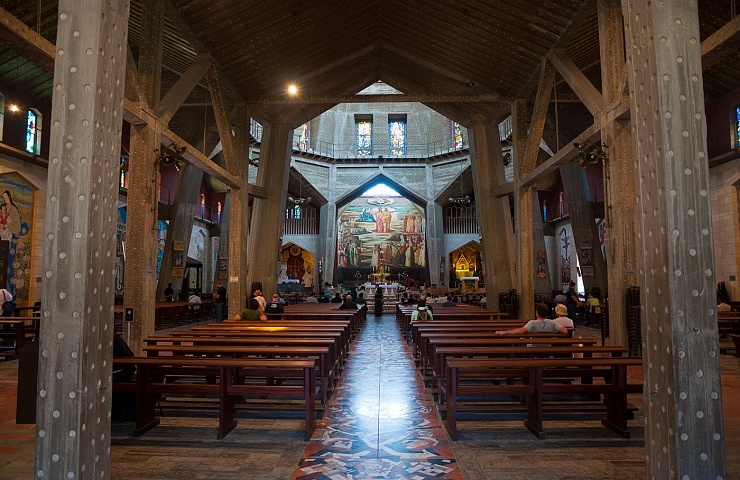 Nazareth is an ancient city, located in the lower part of the Galilee, nearby the Sea of Galilee.

The city is also known as the “Arab capital of Israel”, being one of the largest Arab cities in the north of Israel. Nazareth dates back, archaeologically, to the era called “the pre Pottery Neolithic B” (around 8,000-9,000 years ago). In its Christian tradition, the city was the home of Mary and Joseph, and it is where the Annunciation is believed to have taken place (according to the Gospels of Luke and Mathew). Generally, both history and tradition place Jesus in the city, having grown up in Nazareth and having left it at the age of nearly 30. The city had been conquered by Romans,

Byzantines, Muslims, Turks, and finally announced free when the state of Israel gained its freedom by UN declaration and following the war of Independence in 1948. Nazareth is a prosperous city, being a home to mainly Muslim and Christian residents, enjoying the flourishing tourism that arrive at all seasons, to visit the ruins and to commemorate worship sites.

The heart of Nazareth is the Old City, which is comprised of two parts: the core, i.e. the historical and religious parts and its surrounding; the markets and the old buildings on the slope of the Nebi Sa’in Ridge. To expand the tour, it is worth taking a ride to the top of the ridge, in order to enjoy a breathtaking view of the city and its churches.

The church is located north of the Basilica of Annunciation in Nazareth. It is traditionally believed that this was as initially the house of Joseph and the holy family and his carpentry workshop. Typically to residential houses at that time, the cave beneath the building had served for food and water storage, at the Roman time. Later, during the Byzantine era it had been shifted to a worship place and Ottoman rulers have added to its renovations. Today the church serves worshipers and many pilgrims. The church dates back to 1st or 2nd centuries B.C. Opening hours: Monday to Saturday, 8:00 AM – 5:00 PM; Summer – Saturday to Sunday, 8:00 AM – 6:00 Free entrance

The Basilica of Annunciation

The basilica is a Catholic place of worship, located at the center of the City, on “Casa Nova” Street. The site is believed to have been Mary’s house, where angel Gabriel appeared and announced to Mary that she is about to give birth of Jesus (Luke 1). The basilica is a an impressive building that had been shifted from hand to hand throughout the years of conquer, having been commissioned by Emperor Constantine, as directed by his Mother, St. Helena, but was probably was completed only in 470AD. Arab conquerors have destroyed it but in Byzantine times, and mainly by Franciscan priests, the basilica had been rebuilt. An altar is referred to in c.384 AD and a church is mentioned by c.570 AD. Opening hours: Daily 8:00-11:45am and 2-6pm (5pm in winter); Sunday and Holidays: 2 pm-5:30pm (4:30pm in winter) Free entrance

The church of St. Gabriel was built approximately 6-7C. The Church is the Orthodox counterpart to the Catholic Basilica of the Annunciation in Nazareth. The Church is located over the spring that fed Mary’s well, which is the traditional place where Mary fetched water for her household. There, according to tradition, she had been told about her bearing of the savior; according to Orthodox tradition. Opening Hours: Monday-Saturday 8-5, Sunday 12-2 Free entrance

The White Mosque at the Mosque Quarter

The White Mosque, a Turkish building with an exquisite pencil-shaped minaret is based directly in the center of the market, in the “Harat Alghama”- the Mosque Quarter. The tomb of Abdullah et-Fahoum, former Governor of Ottoman Nazareth and the allegedly builder of the mosque, is in the courtyard. The mosque dates back to 1812, during the reign of Suleiman Pasha. Suleiman’s successor’, Abdallah, put Sheikh Amin el Fahoum in charge of the mosque, and today it belongs to the Fahoum family religious trust. Opening hours: Sunday- Saturday (not during prayer time) Free entrance

The bishop’s residence is situated at the periphery of the “Author’s House Square”; one of the most beautiful squares in the Old City. Local folklore has long claimed that numerous caves lay beneath the square and its surrounding area. In recent excavations it has been discovered to be true. The plan is to install a passageway to enable the linking between the sites, for visitors to be able to tour underground Nazareth. Author’s House Square is the home of what is known as “The Higher Institute of Art and the Author’s House”.

Nazareth Village is a unique attraction for both adults as well as children. The Village was opened, following extensive research, in order to recreate the daily life and habits as were common in Nazareth, at the time of the Roman Empire. Since it Is believed that Jesus had lived in the city for nearly his first 30 years, it was the aim of the organizers to share his possible (and his community’s) lifestyle for us to experience. In the guided tour, of about 1-2 hours, it is explained how daily life -as Jesus would have experienced it was; one can learn about ancient agricultural techniques, how buildings were constructed, what people wore, how they ate, and much more. The tour combines a group of actors who “play” the roles of historical characters, wearing authentic clothing, so as to enable visitors to experience, at first-hand, how life was in Nazareth during the first century. Opening hours: Monday – Saturday 9.00-17.00

-Touring the old city, the marketplace and its numerous relic shops and restaurants is a feast in itself. This treat is recommended to be allocated in the tour schedule. -in light of the light winters in Israel, visits are relevant at all seasons. However, recommended seasonable tours are more convenient in September-November and April-June. The months of June-August are usually very hot.

In the vicinity of this site you may also want to visit Safed; Rosh-Pinna; the Golan Heights or Tiberius…