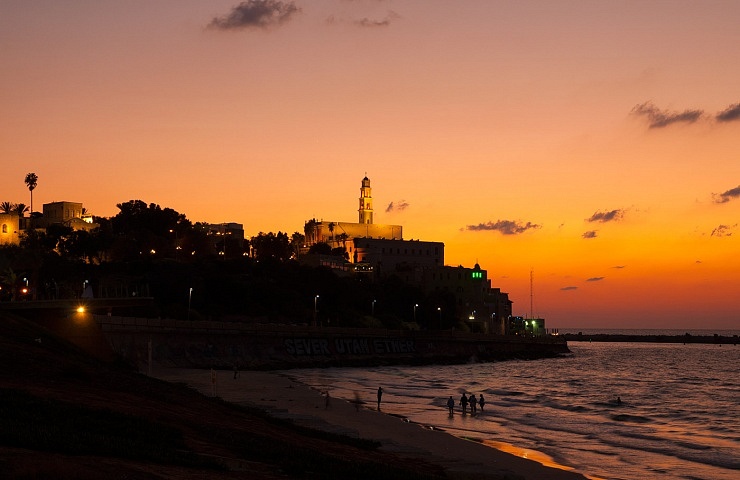 Sunset in Jaffa, Israel
0 Comments
FacebookTwitterGoogle+PinterestTumblrLinkedInRedditEmailPrint
Modern Jaffa is part of the city of Tel-Aviv.
It used to be an ancient port/harbor, connected to Biblical times as well as to the Prophet Jonah.
Various legends aim to explain the origins of the name, whether be it Jopa- the daughter  of the God of Wind, or connected to Japhet – son of Noah (re the great Biblical flood story); or be it another legend-connected to Hellenistic tradition, telling of Andromeda (the story of the rock in the sea);
These days, Jaffa of Yaffa or Yaffo are the popular names.
Jaffa is mentioned several times in the Hebrew Bible, the Old Testament.
It is connected to Kings (David, Solomon), warriors, Army generals (Napoelaon), Crusaders, Ottomans, Babylonian, Maccabean  as well as to the Roman repression of any Jewish religious aspirations.
The New Testament’s account of St. Peter’s resurrection of the widow (in Acts 9:36-42) also takes place in Jaffa. He also had visions there.
The city had known many conquerors, Medieval, Ottoman, Modern, Christian, Muslim or Jewish.Relics have endured throughout time in its stones, buildings and drawings.Modern Jaffa has a heterogeneous population of 47,000 residents: Jews, Christians, and Muslims.
The majority of the Arab population lives in the renewed southwestern neighborhood of Ajami.
One famous school, the “Tabeetha School”, was founded in 1863. It is currently owned by the Church of Scotland and enables education (in English) to children from Christian, Jewish and Muslim origins.
Some of the famous Churches and monasteries are the following:
The Monastery of Archangel Michael; The Church of St. Peter and St. Tabitha serve Russian Orthodox Christian community, there is to be found also the former Armenian monastery of St Nicholas.
Immanuel Church, was built 1904, serves today a Lutheran congregation.
Al-Bahr Mosque is probably Jaffa’s oldest existing mosque; local legend has it that wives of sailors, living in Jaffa, prayed there for the safe return of their husbands.
Mahmoudia Mosque was built in 1812 by Abu Nabbut, governor of Jaffa. It has a water fountain outside – meant for pilgrims.
Today, Nouzha Mosque that is located on the “Jerusalem Boulevard” is Jaffa’s main mosque of prayer.
Films and TV series have been filmed in Jaffa but of recent, the film “Ajami” was Oscar nominated in year 2009, bringing much fame, acknowledgment and honor to the city and its residents.