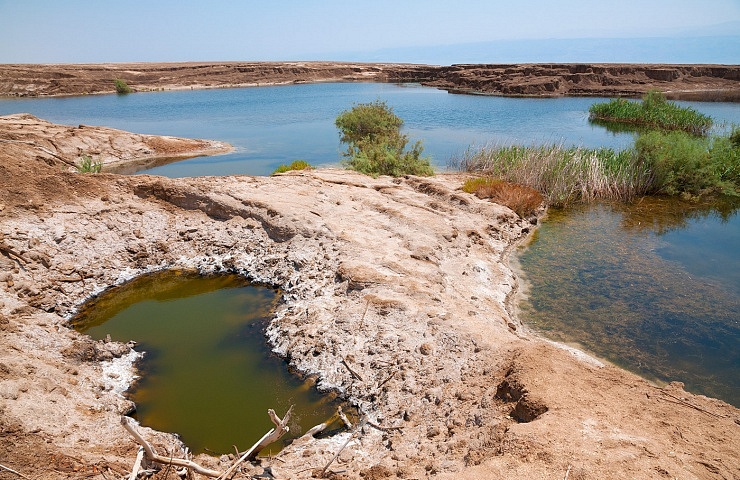 The Dead Sea is a lake of salt located at the south-eastern part of Israel, near its border with Jordan.

The lake is situated exactly 420m (1,385 ft) below sea level, which makes it the lowest location on Earth.

The Dead Sea is some 380m (1,240 ft) deep; it is also the saltiest body of water in the world, with nearly 40% salinity. This unique salinity makes it nearly impossible for animals to flourish, hence its name. However, that same salt provides proven relief to the many ailing visitors who come, on a regular basis, to enjoy its healing properties.

All of these properties make the Dead Sea, no doubt, the most remarkable place on Earth.

Historically, the Dead Sea had attracted people throughout time; Biblically, we are told of King David who sought refuge there; of Prophet Ezekiel who had prophesied that one day the Dead Sea will be “of fresh water and fishermen will spread their nets along its shores”. Even the great king Herod had built one of the world’s first health resorts at its shores.

Throughout history, the lake had been known in its various names, in different languages:

The sea of Sodom,
The sea of Lot
The sea of Asphalt
The …Stinking Sea
The Devil’s Sea
The Salt Sea
The Sea of the Aravah

The sea shore is blessed with black mud that is easily spread on the body and provides the skin with nourishing minerals. Also, the quality of the air (the bromide) is also beneficial to the body. Sufferers of the skin disorder psoriasis also

benefit from the ability to sunbathe for long periods in the area due to its position- below sea level. Its subsequent result, thanks to the reduction of the sun’s harmful UV rays, enables healing.

Many visitors enjoy the healing characteristics of the Dead Sea and many others return on an annual/bi-annual basis.

There are many hotels, hostels and guest houses, restaurants and shopping centers, as well as Tourists’ attraction sites in the area of the Dead Sea.

What is there to see?

-Well, the sea itself, surfing in the salty water, spreading the black mud on ones body, enjoying the unique nature at the beach.

-A trip to the nearby famous site of Masada – an ancient fortress, high up in the mountains.

-A trip to the Dear Sea scrolls site, at the Qumeran Caves, a site where Jewish ancient scrolls were found, including the ones named the “Dead Sea scrolls”; scrolls that offer some insights into the religion and life style of the Esseans

sect- that lived in a secluded Jewish life-style precisely at the site of these caves- during the very beginning of Christian religion and regime.

-It is of value to visit the amazing monasteries built on the cliff walls in the Dead Sea region.

In the fourth century, many Christians who wanted to live their lives as Jesus had and devote themselves to God, made the Judean Desert their home; it had turned out to be an ideal spot for monks, who built phenomenal monasteries,

some of them carved into the stone faces of the desert cliffs.

-Mostly, one will find warm temperatures during the day and very cold weather at nightfall.

– It is highly recommended to use guides, or guided tours, to remain in groups and beware of wondering off into the desert or straying away from marked paths in the natural parks/reserves, especially if one is alone; because of loose

wildlife, the night coldness and the ease of getting lost.

– Take route number 1 from Jerusalem to Maa’le Edomim, until you reach the Dead Sea at the Lido inn.

-Shift to road number 90 for about 20 minutes southbound.

-The road leads to the various stations of the Dead Sea.

In the vicinity of this site you may also want to visit Jerusalem; the Ramon Crater; Sde-Boker or the Timna Valley-Park...