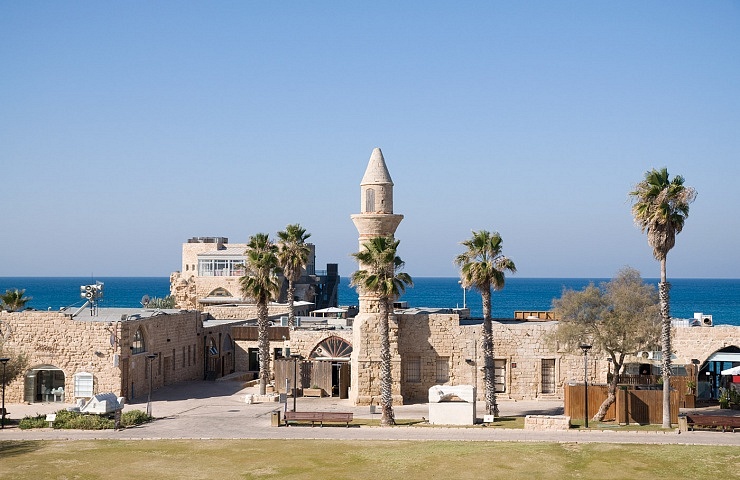 Caesarea is located on Israel’s central Mediterranean coast and is the ancient Roman capital of the land of Israel. Caesarea’s story had begun in the third century BCE during the Hellenistic period, as a small Phoenician harbor-city called Straton’s Tower.

The population of Straton’s Tower was mostly Jewish (as also found during the Hashmonean period, around 90 BCE) until the Romans conquered it in 63 BCE.

Famous King Herod transformed the city as of 22 BCE with the construction of its sophisticated harbor, warehouses, markets, great streets, bathhouses, temples and magnificent public buildings, naming it Caesarea –in honor of the Roman Emperor.

As a habit, every five years the city hosted gladiatorial games, sports’ competitions and performances, in both theater and hippodrome.

Caesarea continued to flourish during the Byzantine period, through the Early Arab period and apparently until the 11th-century Crusader conquest. Later, the city and its monuments were buried by sand storms.

-There are several important places to visit while touring ancient Caesarea. Main highlights are:

-The Theater; built by King Herod for sake of performances (it is built as only half a circle, had it been a full circle theater it would have been named: Amphitheatre).

-The Hippodrome; an arena set by King Herod for horse-races and other sports’ games.

-The Palace, nearby the above two monuments, which no one, yet, knows who were its original owners. Some believe it to be King Herod but many other archaeologists believe that Herod, being as paranoid as he had been, would not have built a palace so close to arenas that had attracted thousands of visitors.

-The Aqueduct; that had led a constant flow of water to the town from various places outside of it. It had probably been built some time before King Herod’s regime.

-The Temples; built by King Herod, in honor or the Roman Emperor, Augustus and of the Goddess of the City of Rome.

-The Harbor, shielded, safe and filled with various species of sea life, as sea-turtles, that have been declared as protected animals, or the unique sea shells, that are of an ecological and natural preserved value to this shore.

-The galleries, restaurants, bathing beach and diving center that are of their own modern unique value.

Caesarea National Park is located off the Tel Aviv-Haifa highway (road number 2), near Kibbutz “Sdot-Yam”, west of the town of “Or-Akiva”.

It can be reached via the “Orot-Rabin” power station junction or from road number 4, via “Or-Akiva”.

-Best season: all year round; do not miss a walk on the promenade at sunset

-Opening hours: April–September 8 AM–6 PM
October–March 8 AM– 4 PM
On Fridays the site closes one hour earlier to the above

-Accessibility for the disabled: there is wheelchair access to the theater, promontory palace, archaeological garden, hippodrome promenade; a vehicle for mobility-challenged visitors at no extra charge will be available shortly.

In the vicinity of this site you may also want to visit Haifa or Mount Arbel.…